Belarus ‘dictator’ plays cat and mouse with Europe and Russia 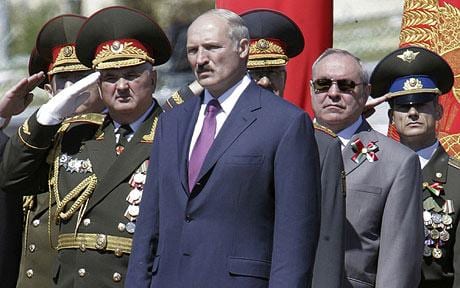 Belarus is Europe’s last dictatorship. And despite Brussels’s steadfast concern over the harsh repression meted out by its president, Alexander Lukashenko, Belarus stands defiant in the face of Western pressure for change.

Europe’s ambitions to encourage liberalisation in the country of 9.5 million have not met with success. Moscow too has grown tired of constant resistance from Minsk.

But where some experts believe the country’s economic crisis and increased military cooperation may be about to bring Belarus firmly into Moscow’s orbit, past performance demonstrates 59-year-old Mr Lukashenko has an ability to play Moscow and Brussels off each other.

Alexander Lukashenko, a former farm manger and KGB guard, is dismissive of Western democracy. He was first elected in 1994 in the wake of the Soviet Union’s collapse and has, controversially, remained president ever since.

Mr Lukashenko is unconcerned about his reputation as the ‘last dictator in Europe’. Nor is he concerned over general incredulity that he is grooming his pistol-carrying nine-year-old son Kolya to succeed him.

During his years in office, the Belarusian president has ensured his country remains a replica of the old USSR. Elections are charades. Parliamentary elections in September 2012 did not return a single opposition candidate.

Though the streets are clean and safe, the authorities keep a close watch. The security service – as in the USSR – is still known as the KGB. All opposition is dealt with harshly via intimidation, beatings, arrests, and disappearances. Belarus is the only European country that continues the practice of execution.

Mr Lukashenko irritates Brussels. Although a Partnership and Cooperation agreement was signed in 1995, Belarus remains the only country in the region that has not even applied for EU membership. Neither is Minsk – considered too undemocratic – part of the European Neighborhood Policy.

Following the violent crackdown on demonstrators protesting over widespread fraud in the December 2010 presidential elections, the EU slapped a visa ban on members of the ruling elite and froze their assets in Europe – to little effect.

In the spring of 2012, a European Dialogue on Modernisation was introduced, but civil society in Belarus is too weak to constitute a partner.

Brussels insists political prisoners are released and worries Belarus will succumb to complete dependence on Russia. Minsk suspects that the EU’s real objective is regime change.

Much presently depends on Lithuania – the first Baltic state to hold the rotating chair of the EU. Lithuania maintains a lucrative trade with Belarus, in potash and petrochemical products, and its capital city, Vilnius, is home to a Belarus free university.

The Lithuanian city will host the third European Neighbourhood Policy (ENP) summit on November 28 and 29, 2013. But few believe that any breakthrough in relations with Belarus is imminent.

Moscow too finds the self-proclaimed dictator troublesome. Although Belarus has, since 2000, been treaty-joined with the Russian Federation in a ‘Union State’ to provide greater political, economic, and social integration, the proposals have never been seriously pursued. While Moscow would like to see Belarus as little more than a subject of its own federation, Belarus demands to be treated as a sovereign state.

Some believe, however, that a combination of economic crisis and increased military activity may end Belarus’ standoff.

And Russia’s recent accession to the World Trade Organisation (WTO) has added pressure on Moscow to remove subsidies which will have a major effect on Belarus.

While increased economic control would be in Russia’s interest, the true value of Belarus lies in the territory itself, which borders NATO member states Poland, Latvia, and Lithuania.

Russia now intends to base fighter jets at a military airbase in Belarus by 2015. It also plans to deliver four battalions of long-range surface-to-air missiles in 2014. And in September 2013 the two will hold a joint military exercise, Zapad-2013.

It may look as though Moscow has its troublesome neighbour over a barrel, and that Brussels may have missed its final opportunity to support Belarusian independence from Russia. But one should not discount the ability of Mr Lukashenko to continue his long-successful game of playing Moscow and Brussels off each other.