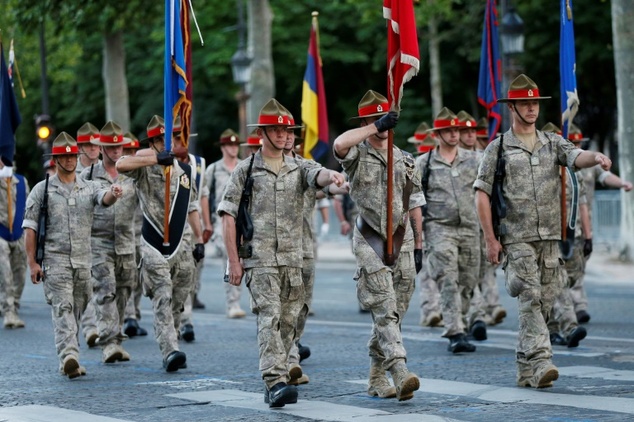 BRAZIL has several reasons for wanting more submarines. A larger, modern submarine fleet would be a strong deterrent to protect Brazil’s extensive coastline and its offshore and onshore resources, including oil, wood and uranium.

A nuclear-powered submarine, which Brazil plans to have built by 2025, would have worldwide reach, deep-water stealth, and strike capability.

The hope is that this would deter any possible foreign invaders after Brazil’s abundant natural resources and gain the country military prowess to match its economic status. This would elevate the country’s position on the world stage.

The shipyard which will build Brazil’s new submarines is south of Rio de Janeiro and was inaugurated in March 2013.

Brazil’s President Dilma Rousseff said: ‘This facility allows our country to affirm itself on the world stage and, above all, develop in an independent sovereign way.’

She said Brazil, which is one of the BRICS (Brazil, Russia, India, China, South Africa) group of emerging national economies and Latin America’s largest nation, was a peaceful country but a defence industry was needed to deter and prevent violent conflict.

Brazil’s motivations are as much economic and industrial as they are military.

The technology, infrastructure, and human capital required to build modern submarines and to design and operate small nuclear reactors can contribute to numerous other industries and scientific projects.

Yet the nuclear submarine programme is not without risks. The costs are estimated at up to US$4 billion or more over 15 years.

Brazil’s experience with its aircraft carrier is not encouraging. The carrier Sao Paulo, purchased from France in 2000, has been plagued with mechanical problems and has been deployed only a few times for training purposes.

Such investment in naval assets with no clear purpose is questionable for a nation that still struggles to provide critical services such as education, healthcare, electricity and police for millions of its citizens.

If Brazil’s economy continues to slow, and state revenues fall, the continuation of popular anti-poverty and education programmes could require cuts to the submarine project and other expensive security programmes.

These projects would supply aircraft and ships to Brazil’s armed forces and generate opportunities to export.

Brazil aspires to export submarines and other warships, unmanned aerial vehicles or drones, and other defence equipment.

These projects would like to emulate the success of the Super Tucano fighter jet, made by Brazil’s aerospace conglomerate, Embraer. The small, durable jets have sold around the world, especially in Latin America and Africa. The US has bought 20 of the jets for use by the Afghan military.

Brazil’s new state-driven efforts to build submarines and other warships are a gamble. If they are to compete globally, these projects must weather the financial winds from slowing gross domestic product (GDP) growth rates, and the mismanagement that frequently comes with state involvement.

Transport ships, small-deck amphibious ships and frigates with helicopter pads are useful for important missions in the South Atlantic such as humanitarian assistance, disaster response, and stopping drug traffickers and pirates.

Aircraft carriers and nuclear submarines are designed chiefly for war, particularly to give a country the ability to wield force far from its own territory.

According to some military analysts, the UK’s nuclear submarine was a deciding factor in the Falklands/Las Malvinas conflict, one for which Argentina had no answer.

Brazil has always been a vocal advocate of Argentina’s claim to the Falklands in 1982. If Brazil successfully produced a nuclear-powered submarine and was capable of operating it effectively, its navy would be the pre-eminent power in the South Atlantic.