Most dangerous countries in the world 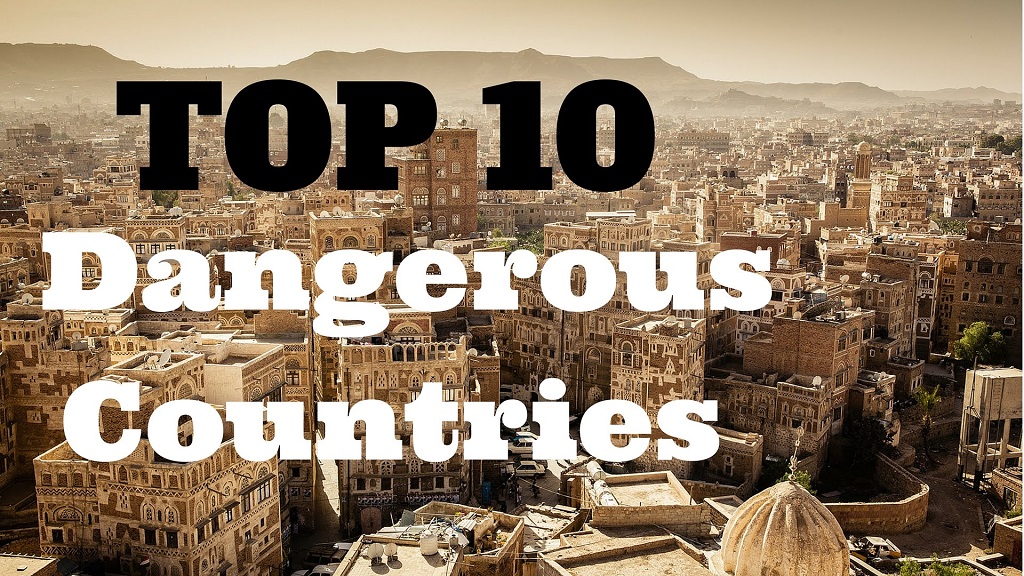 Talking about the most dangerous countries in the world is the same as talking about international politics and humanity’s history. This is not a fixed classification, but each year it varies depending on the wars and conflicts that arise and die worldwide.

Most dangerous countries in the world

The Global Peace Index is the indicator that measures insecurity, inequalities and dangers in countries around the world and, through which, we can classify the most dangerous countries in the world. As you can see below, these countries are mostly in the Middle East and sub-Saharan Africa. Although the number of global homicides has decreased, the number of victims of war conflicts and terrorism has increased. Do you want to know which is the most dangerous country in the world? In the following article, we will explain them to you.

You only need to turn on the television or open a newspaper to understand the bleak reality that this Middle Eastern country is experiencing, something that in recent years has made Syria the most dangerous country in the world.

This danger is due to the war that began in 2011 when protests against Bashar al-Ássad led to strong repression. But to understand the war in Syria, we cannot stop with protests and repression. The reality is that it is a civil war that is fought on a large scale. Many countries and crossed interests participate, which has become an international conflict in which the fight against terrorism and economic and geostrategic interests are mixed. That, so far, has already left nearly 400,000 civilians and military dead, whether Syrians or foreigners and millions of displaced people.

The war in Syria, which has made this country the most dangerous globally, is not only a great humanitarian catastrophe. It is also the deadliest war of the 21st century.

In 2001, the war conflicts in Afghanistan opened all the newscasts. At that time, the eyes of the whole world were on this territory of the Middle East. Barely 15 years later, has it seemed that almost no one remembers the suffering of this population, even though today it continues to be one of the most dangerous countries in the world?

The war, the political instability, easy access to guns, and being an essential enclave for Islamic terrorism have turned Afghanistan into the second country in the world to export more refugees.

Also, Afghanistan is considered by international observatories as the most dangerous country for women. Not only is conflict and constant bombings, which endanger everyone’s lives, political and religious practices, and the culture of rape, make Afghanistan an impossible place for women to lead full lives. It is not surprising that those who want to lead a full life, assuming public roles as journalists, are subjected to intimidation, violence and even murder.

In 2013, two years after his independence, the vice president of South Sudan attempted a coup in the newly created country. This clash, which is ethnic rather than political, started a war that is still in force today and has left more than 50,000 dead and nearly 2 million displaced.

But it is not only the bullets that make South Sudan one of the most dangerous countries globally, but the famine is also ravaging the population of this country. Such is the problem that almost 50% of the population can only eat with humanitarian aid, aid that does not arrive because the roads have been closed for more than 2 years. Since the armed conflict began, about a hundred aid workers have lost their lives in this country.

War, hunger and sexual violence, this African country experiences rape like a veritable plague. In Juba, the capital is where one of the largest refugee camps is located and, according to UN figures, more than 70% of the women living there have been raped.

Iraq has been at the top of this sad classification for years. In fact, in 2008, it was considered the most dangerous country in the world. All this resulted from the American invasion and subsequent war that began in 2003 since more than 850,000 people have died.

The war officially ended in 2011, yet Iraq remains one of the countries where the war has left the most devastation. Although the war has ended, the conflicts, which are still very present in Iraqi society and the region’s political and economic instability, have not ended.

All this must be added the rise of the Islamic State, which has been expanding in the area, leaving a trail of blood and gunpowder, causing major war clashes in cities such as Tikrit or Mosul.

There has been a permanent war in Somalia since 1991 and political instability dates back to more than half a century. As in almost all conflicts, the main victims are children and women, who receive the fruits of unusual and incomprehensible violence.

The violence that exists in this African country is extreme and uncontrolled. It is a fragmented area where each area is dominated with an iron hand by some guerrilla or warlord. Also, as you have also seen in other countries on this list, instability creates the perfect breeding ground for international terrorism to do its murky work, making it one of the most dangerous countries in the world to travel.